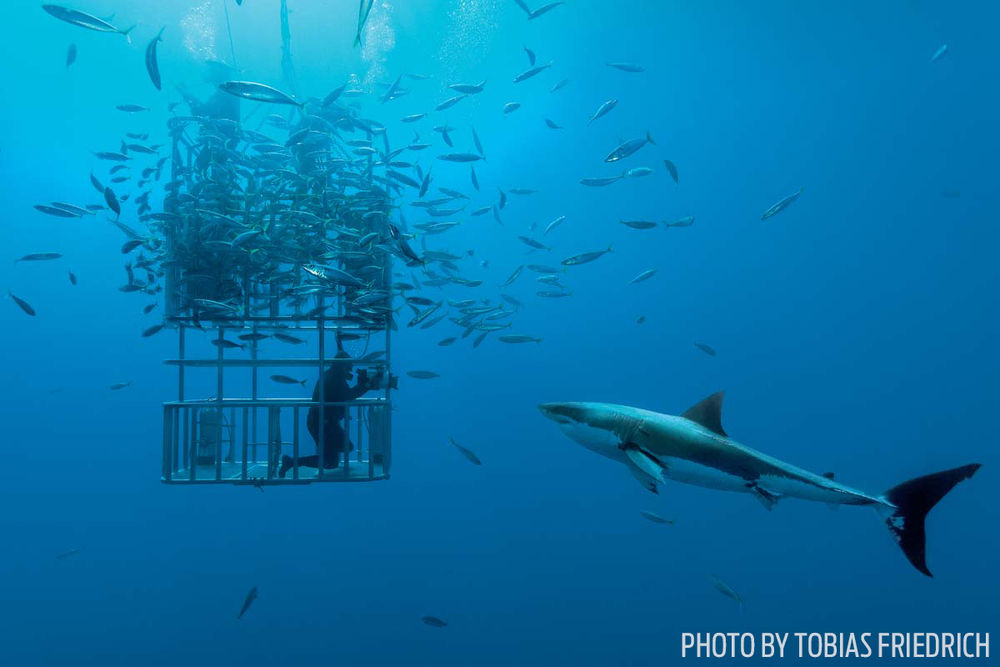 Pleasure expert Gretchen Rubin, author of The Happiness Project, believes one of the biggest keys to a satisfied life is building anticipation — and one satisfying way to meet that is through travel. For weeks, maybe even months, it’s an inked-on-the-calendar joy you can look forward to. For divers, this means bucket-list adventures. Ones that require saving toward, expanding skill level or trying out a brand-new camera system or rebreather. This year’s list was born from the trips that prove most inspiring, prompting us to globe hop in search of wonder. Here are our choices for the dive trips that are the greatest shows on Earth. 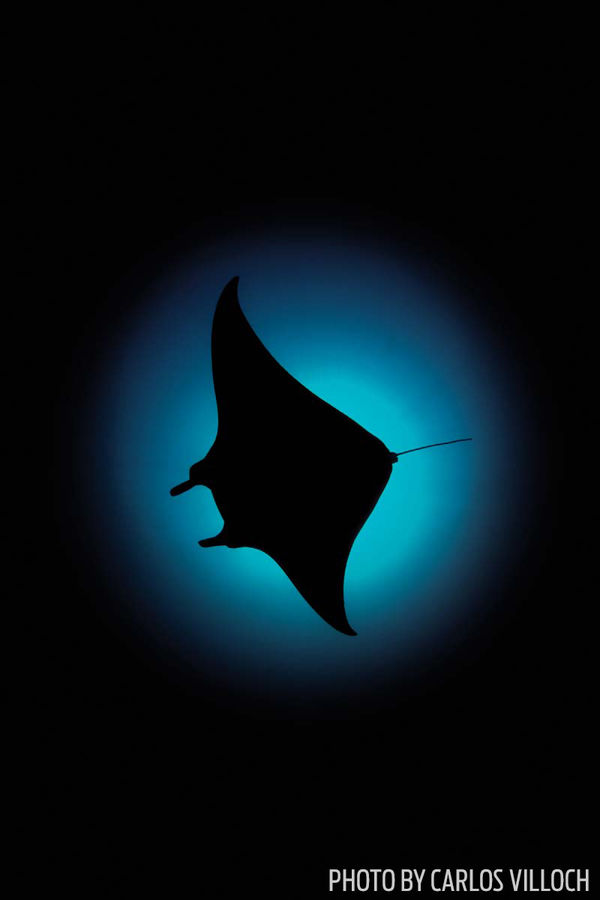 A manta swims over a cleaning station in the Maldives.

“The whale sharks are simply another layer of what makes the Maldives so exciting,” says underwater photographer Scott Johnson. The Indian Ocean island nation, a staple for romance and exoticism, is famous for white-sandfringed atolls, ultraluxe accommodations, the mantas of Hanifaru Bay and the year-round population of whale sharks at South Ari Atoll. There, you’ll likely encounter juveniles in the 17- to 20-foot range feeding on the surface. Even if you choose a dive tour for the day, you’ll spend the surface interval snorkeling among the spotted wonders.

An intermediate experience level. Although encounters are snorkel-only, the currents and surge, plus the requirement of equipment such as surface-marker buoys, make the destination ill-suited to beginners. 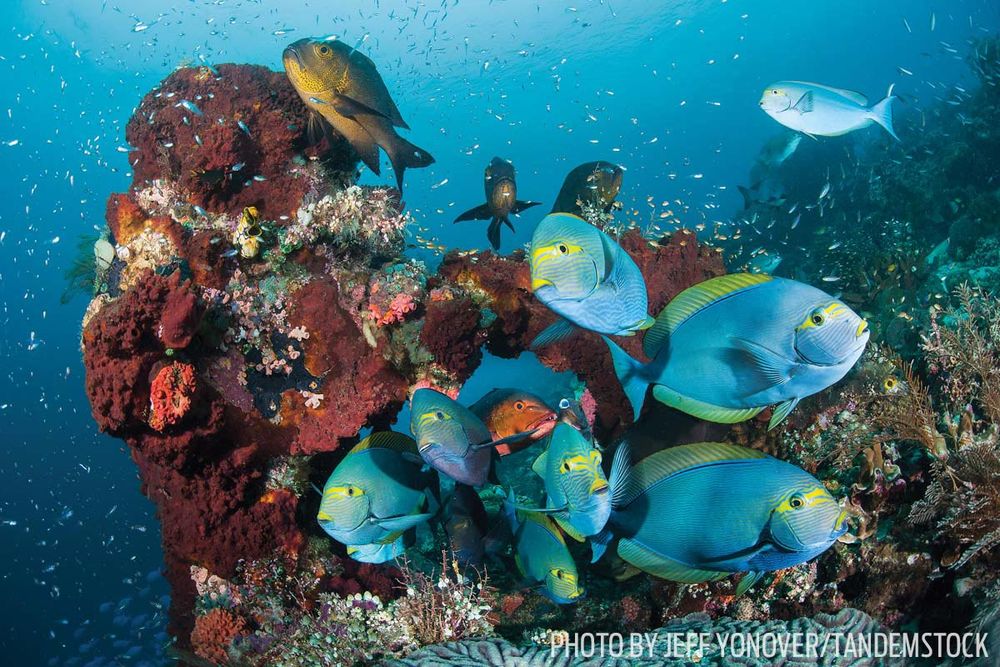 “You can spend many lifetimes here and still only be scratching the surface of everything — so little is known about the region’s biodiversity,” says underwater photographer and marine biologist Ethan Daniels of Raja Ampat, located between the Pacific and Indian oceans. A fish count conducted in 2006 by the nonprofit Conservation International tallied 1,200 species — a number that increases yearly due, in part, to the vast variety of habitats concentrated in the Indonesian archipelago. “I’m really intrigued by the number of marine habitats you can explore in a day,” says Daniels, listing mangroves; deepwater pinnacles; narrow, shallow channels; reef walls; and muck dives. And because so much of the area has yet to be explored — and its species cataloged — new discoveries are all too common. Says Daniels of the thrill of the hunt, “Here, you don’t even know what you’re looking at.”

A beginner with a strong love for fish identification. Says Daniels, “You don’t need to know thousands of species, but you should have an appreciation for biodiversity.” 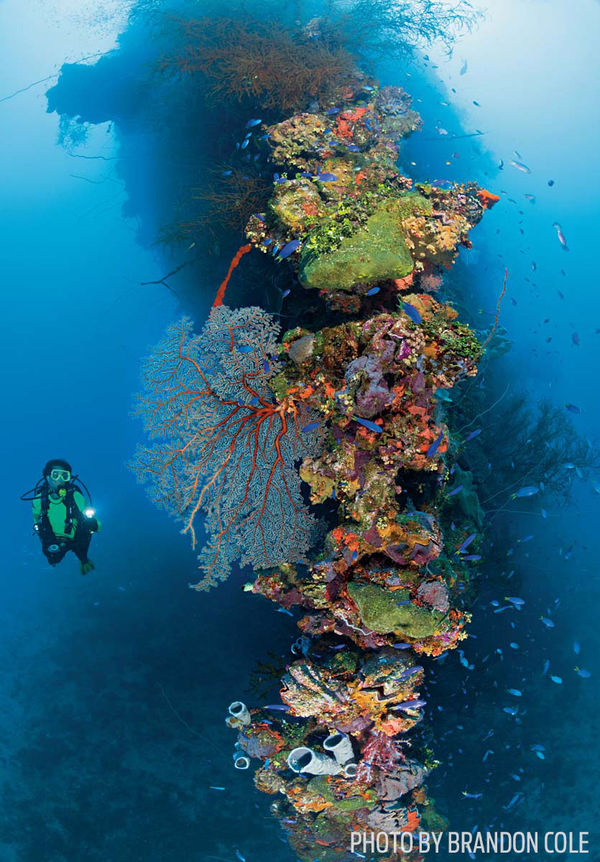 Colorful marine life grows on the anchor chain at the bow of the Fujikawa Marushipwreck in Chuuk Lagoon.

No destination delivers a stronger go-here-now argument. The Imperial Japanese Navy vessels sunk by U.S. forces during the three-day attack of Operation Hailstone in 1944 are deteriorating. The Fujikawa Maru, among the most photographed of the 80-some wrecks, has begun to collapse, complicating penetration of the engine room and machine shop. “The Fuji in particular might not be safe to explore for another 20 years,” says photographer Brandon Cole. It’s among the most prized of the area’s wrecks for its soft-coral-covered superstructure as well as the trove of cargo artifacts inside: guns, fuel drums and, most notably, Zero fighter planes. Says Cole, “When you swim among signs of humanity, it’s impossible not to be moved.”

An intermediate experience level. Says Cole, “It’s certainly not one to do on your second open-water dive.”

“It’s an adrenaline rush that appeals to the extreme-sports fanatic,” says Jose Sanchez. The director of operations for the Solmar V liveaboard is talking about cage diving with the 20-foot great white sharks in the Pacific Ocean off Isla Guadalupe, Mexico, about 200 miles off Ensenada. Thanks to his team of veteran shark wranglers well versed in reading the animals’ behavior, interactions are intimate. “When a shark passes, you could reach out and touch it if we let you,” he says — although contact is strictly forbidden. Sanchez says travelers to Isla Guadalupe are most surprised by two things. “One, that you don’t have to fly to South Africa for this type of experience.” Instead, to dive this stretch of Pacific, you need not leave the country; buses carry guests from San Diego to the departure dock. The other stunner is the water. “Guadalupe is so popular because 100 feet or more of viz is common,” says Sanchez. “The TV clips you see of great whites? All filmed here.”

An advanced snorkeler. Solmar V has hosted guests as young as 12 who have considerable snorkeling experience. 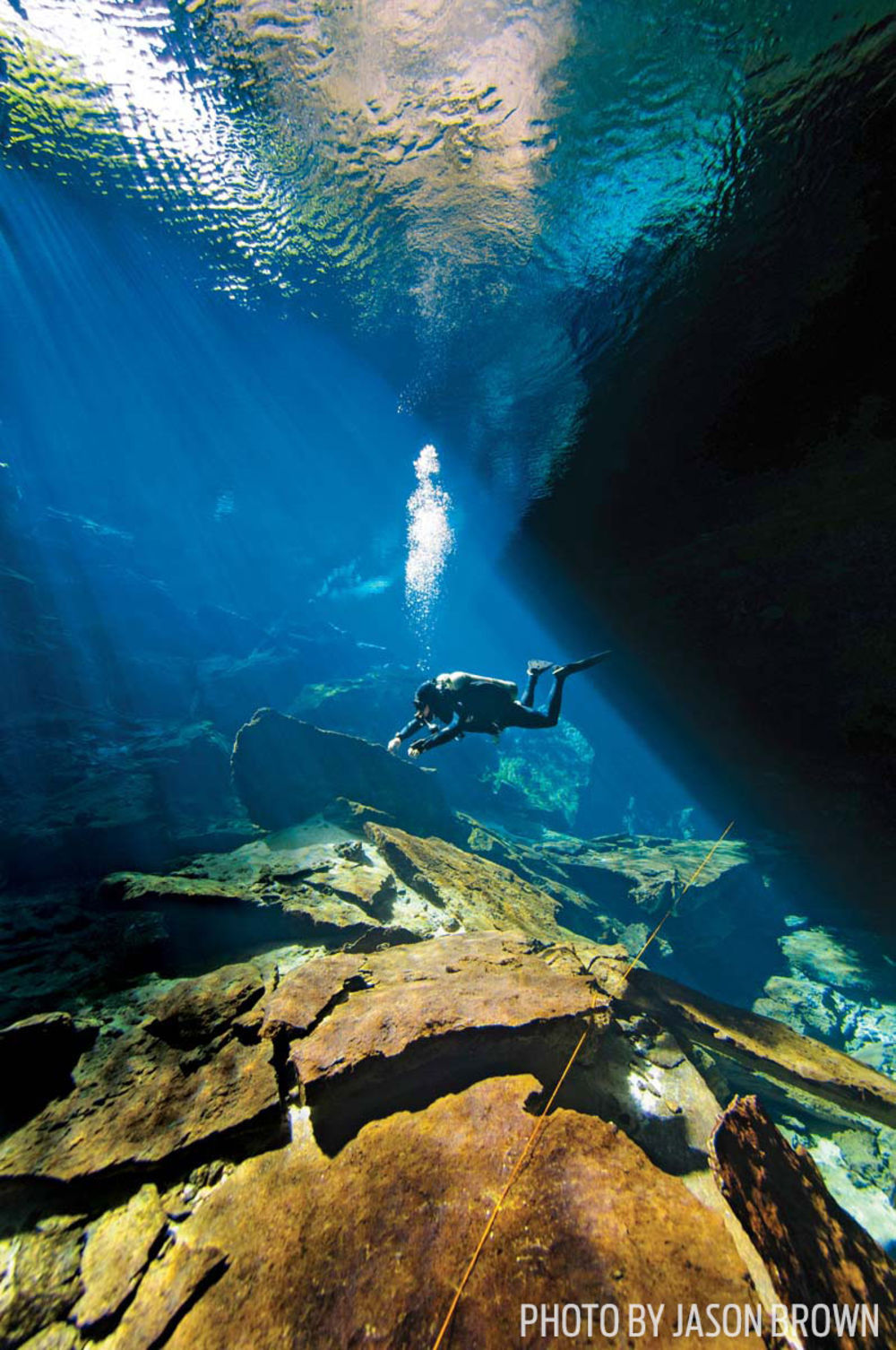 Strong sunlight cuts through the shallows in Kukulkan cenote.

“For a double-header, do Chac Mool and Ku Kul Kan in a day — they’re side-by-side, making for a superb combination,” says underwater shooter Brandon Cole of his favorite cenotes, aka cave and cavern dives in Mexico’s Riviera Maya. The area, just south of Cancun and stretching along the eastern coast of the Yucatan Peninsula, is known for an elaborate network of caves whose total mapped footage grows yearly thanks to a large concentration of some of the world’s top underwater explorers. Chac Mool is perhaps best known for the Room of the Monster, housing the world’s largest underwater stalactite; the cave is also home to fossils, an air-filled dome and serpentine passages. Ku Kul Kan, also known for stunning formations, kicks off with a halocline where salt and fresh water merge to create what Cole calls “that weird, wormy water that shimmers with rainbows.” It’s just another reason he says, “These two cenotes have most of the oddities one can experience in a cenote.”

Open-water certified. Although these cenotes are beautiful, they’re definitely no place for first-timers to venture alone. Regardless of skill level, go with a guide. 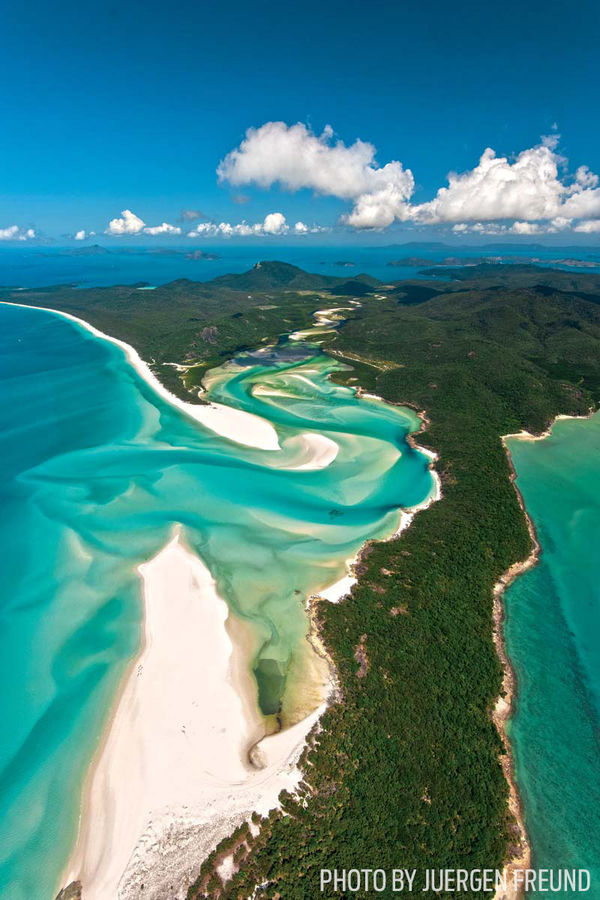 “Let’s put it this way — after we visited, we immigrated,” says underwater shooter Juergen Freund of visiting the 1,243-mile Great Barrier Reef, which inspired him to leave Germany with his wife. “The first time I saw the Ribbon Reefs in brochures, I thought they were photoshopped,” he says, referring to the junglelike reefs wild with hard corals, home to potato cod, green turtles and massive schools of yellow snapper and horse-eye jacks. Freund’s favorite time of year is Australian winter. It’s minke whale migration season. “They are so inquisitive, they come closer and closer,” he says. “You spend the whole day in the water surrounded by minke whales — it’s totally awesome!”

Open-water certified. There are plenty of options at the GBR. Need more of a challenge? Go deeper. “The Great Barrier Reef fizzles out at 90 feet, so you can choose your depth,” says Freund. 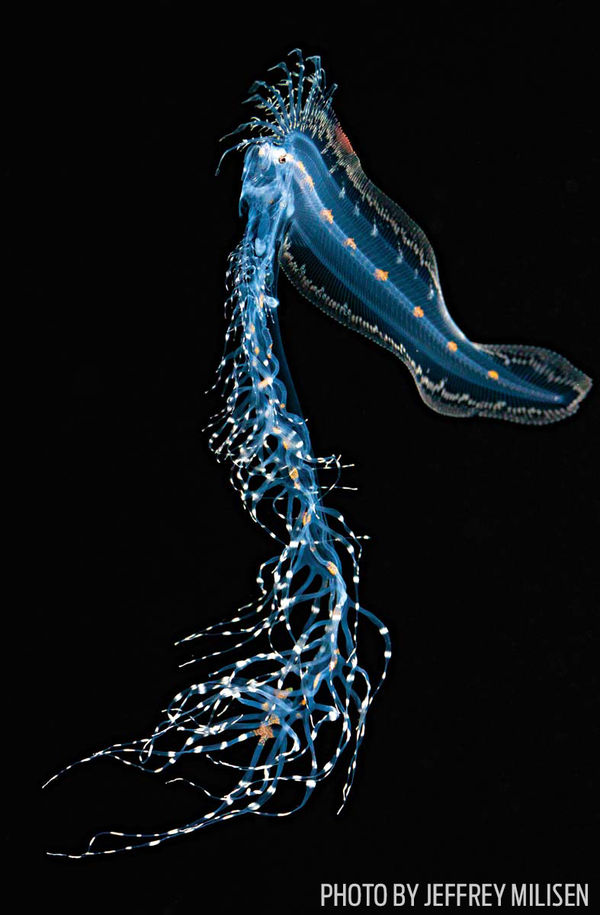 A larval cusk eel in the open sea

The world’s largest animal migration happens not in Africa, but nightly off the Kona coast in the Pacific. “It differs from any other recreational dive experience,” says underwater photographer Jeff Yonover of the black-water dive called Pelagic Magic, which allows divers to witness thousands of animals, most no bigger than half an inch, making their evening commute from 5,000 feet to the surface to feed. You’ll stay at an average depth of 50 feet while shining a light on jellies and other deep dwellers to reveal their translucent insides as well as luminescent displays. “It’s mind-boggling,” says Yonover. “You’re seeing animals you’d otherwise never get an opportunity to see unless you have a submarine.”

Advanced openwater certified. “Oof! This is definitely not for beginners — if you don’t have at least 20 night dives, you might freak out,” says Yonover. 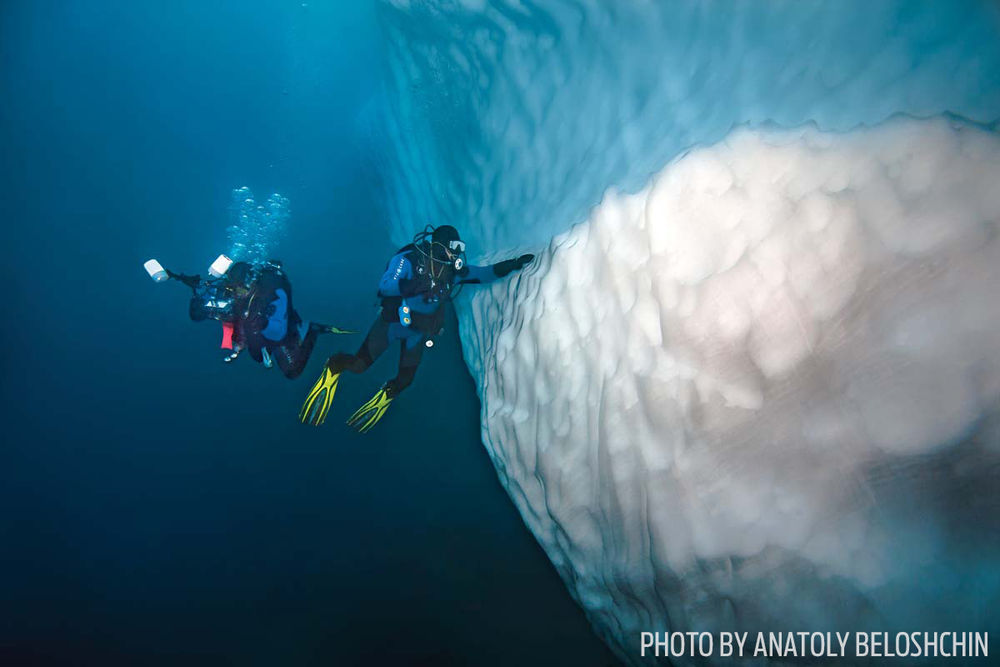 Icebergs the size of cities, whales in every direction and that nonstop march of the penguins make Antarctica a trip every diver should save toward — and not just because it provides bragging rights to those looking to bag every continent. “Unlike the Galapagos, which is only protected by one country, Antarctica is protected by governments around the world,” says Keri Wilk, who just returned from a polar expedition aboard Plancius, part of the Oceanwide Expeditions fleet. “The animals have essentially no human contact.” It’s typical to be chased by fur seals and splashed by orcas playing in the wake of the tenders. Plus, says Wilk, “Whales were always within sight.” He estimates sighting 200 minke and humpback whales on the voyage. At night, when the group camped on the mainland, they heard whale spouts in the middle of the night. For those who can overlook water temperatures of 28 degrees Fahrenheit, says Wilk, “It’s surreal — it’s not like anything else you’ll ever experience.”

Advanced openwater certified, with at least 20 drysuit dives in water temperatures of 40°F or lower; five of the dives need to be within six months of departure. Divers provide their own equipment. 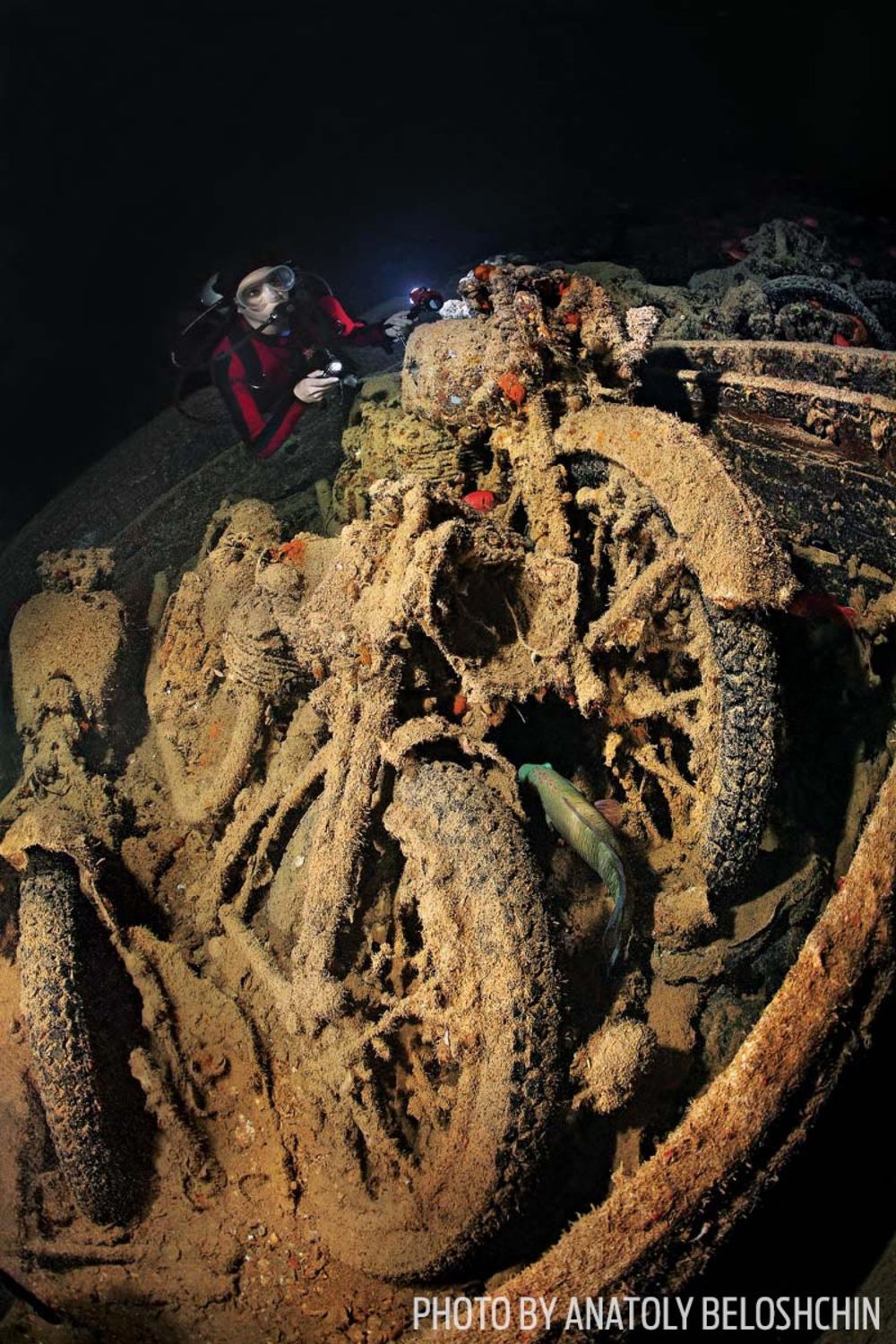 Motorbikes at the SS Thistlegorm

“This wreck deserves all the hype,” says Mark Evans, editor of Sport Diver magazine in the U.K. The 419-foot British navy freighter was loaded with supplies when torpedoed by German bombers off Ras Mohammed, Egypt, in 1941 and sunk to a depth of roughly 100 feet. “It’s loaded to the gunwales with wartime equipment,” says Evans, rattling off a catalog of what lies inside: explosive shells, rubber boots, steam locomotives, rifles, motorbikes and Bedford trucks — all now covered in silt and swarmed by anthia schools. For its cargo, recreation-friendly depth, historical relevance and proximity to the shore, says Evans, “It ticks every box in what you want in a wreck.” 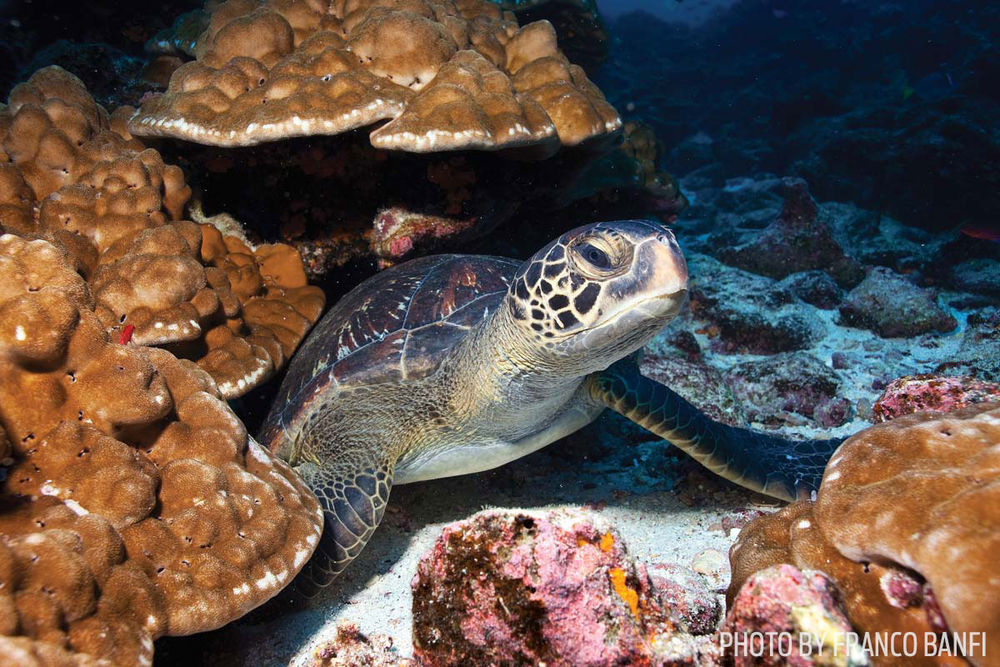 A sea turtle off the Galapagos Islands

“You’ll easily have hundreds of scalloped hammerheads overhead,” says underwater photographer Scott Johnson of diving the eastern Pacific’s Galapagos Islands of Ecuador. The hammerhead concentration off the northern islands of Wolf and Darwin is just one underwater draw of the birthplace of the theory of evolution. Underwater, you’ll also meet whale sharks, fur seals, sea lions, manta rays, mobula rays and schools of eagle rays numbering in the dozens and regularly approaching within inches. Plus, trips to this outpost include topside treks for encounters with blue-footed boobies, marine iguanas, magnificent frigate birds and other one-of-a-kind wonders. “For the marriage of underwater life and topside diversity, few places are as bucket-list worthy as the Galapagos,” says Johnson. “After all, how many places can you snorkel with whale sharks and penguins?”

Advanced open-water certified. Galapagos can be challenging thanks to down-currents and water temperatures dropping to 66°F July through December. Says Johnson, “Plus, when you’re that remote, you need to know how to take care of yourself.”

Visit the Travel section of our websites to discover the best scuba diving on the planet.