Whether you’re a seasoned diver or brand new to the sport, chances are you’re keenly interested in the aquatic life around you. New divers especially may wonder what they’re swimming with. With over 20,000 different species, basic fish ID can be baffling, and becoming an expert can take years of study and experience. As a starting point, we’ll look at 10 key warm-water fish families to help make basic fish ID easier on your next dive. Basic fish ID must begin with parrotfish are a relatively common sight. You’ll often see them munching happily on the reef, adding color and character to the scene. Largely a tropical family, parrotfish inhabit most warmer waters. A reef’s health relies largely on parrotfish, which use their powerful, parrot-like beak to scrape algae off rocks and coral. They digest the algae, but the tiny particles of coral pass through them as excrement, creating large quantities of the white sand we all love so much. Watch a parrotfish on your next dive and you’ll often see them excreting sand as they scurry over a reef.

Males are often, as is common in the animal kingdom, much more colorful than the females. Green is generally the dominant colour. Wrasse, with an estimated 600 individual species, make up one of the largest fish families on coral and rocky reefs. These fish are quite diverse and even while growing up can change color and sex. In fact, juveniles are usually female first and later become male, then acquiring a harem of female wrasse.

With such a breadth of family shapes, sizes and colors, it’s difficult to pinpoint wrasse precisely in terms of shape and size. Wrasse are generally slightly smaller than parrotfish with more elongated bodies. At one end of the wrasse spectrum are small hogfish and razorfish, and at the other are the famous Napoleon wrasse, which can grow to the size of a coffee table.

Wrasse to look out for: Napoleon, rainbow, cleaner, bird 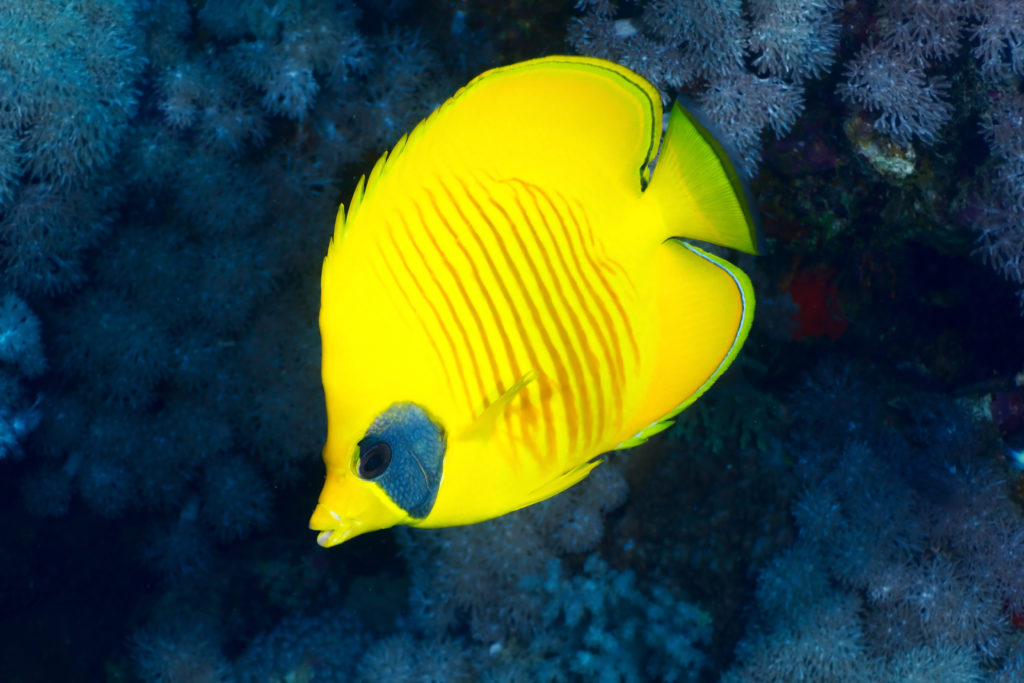 Among the prettiest fish families circulating in shallow reef waters, butterflyfish are usually small and disc-shaped. They feature intricate coloring and patterns, often blue, red, orange, or yellow. There are over 100 species, and many, like tiny super-heroes, have dark “masks” around their eyes. Many species also sport dots on their sides that look like eyes, a feature evolved to confuse predators so they won’t know which way the butterflyfish is likely to flee when attacked. Butterflyfish have long, thin snouts and divers sometimes confuse them with their cousins, the angelfish. Unlike the haremic wrasse, however, the butterflyfish will often choose a single mate for life.

Butterflyfish to look out for: raccoon, chevron, beaked, longnose There are approximately 40 species of triggerfish. Although very attractive, experienced divers know that triggerfish are famous for their potentially aggressive attitude. Particularly around their nests, triggerfish are wary of intruders, from other fish to divers simply passing by. They’re likely to bump or charge their victim and bite with their powerful teeth, so give them wide berth if they seem agitated. Many dive instructors and guides around the world have experienced triggerfish attacks.

Divers will often see triggerfish pounding and digging at the seabed, searching out prey such as crabs and worms. They also use their prominent, tough teeth to feed on sea urchins, sometimes spinning them over to expose the urchins’ bellies, which are armed with fewer spines.

Although varying in size — the largest being the stone triggerfish, which can grow up to 3 feet (1 m) long — the most common are the blue, clown and titan triggerfish. You can generally identify them by their large heads, “trigger-like” dorsal fin, and protruding incisor teeth.

Triggerfish to look out for: titan, blue, clown, starry, redtooth Seahorses and their cousins the pipefish and ghost pipefish number around 200 species in the world’s oceans. These interesting creatures feature not only the equine facial characteristics for which they’re named and an upright stance, but are also the only animal on the planet where the male of the species gives birth. When mating, the female deposits her eggs into the male’s pouch and he fertilizes them internally. Baby seahorses emerge into the water fully formed at the end of the gestation period.

You can find seahorses in tropical waters around the globe, usually in shallow waters less than 100 feet (30 m) deep. They cling onto seagrass or coral in sheltered areas away from strong currents, partially because they are not strong swimmers. They have only a small fin on their back, which flutters up to 35 times per second to propel them onward. Seagrass and coral also offer access to the crustaceans that seahorses feed on, sucking them up through their long snouts.

A favorite with underwater photographers for their natural beauty, seahorses vary in size from the tiny and difficult to spot pygmy seahorse through to the gregarious leafy seadragon, only found in Southern Australian waters.