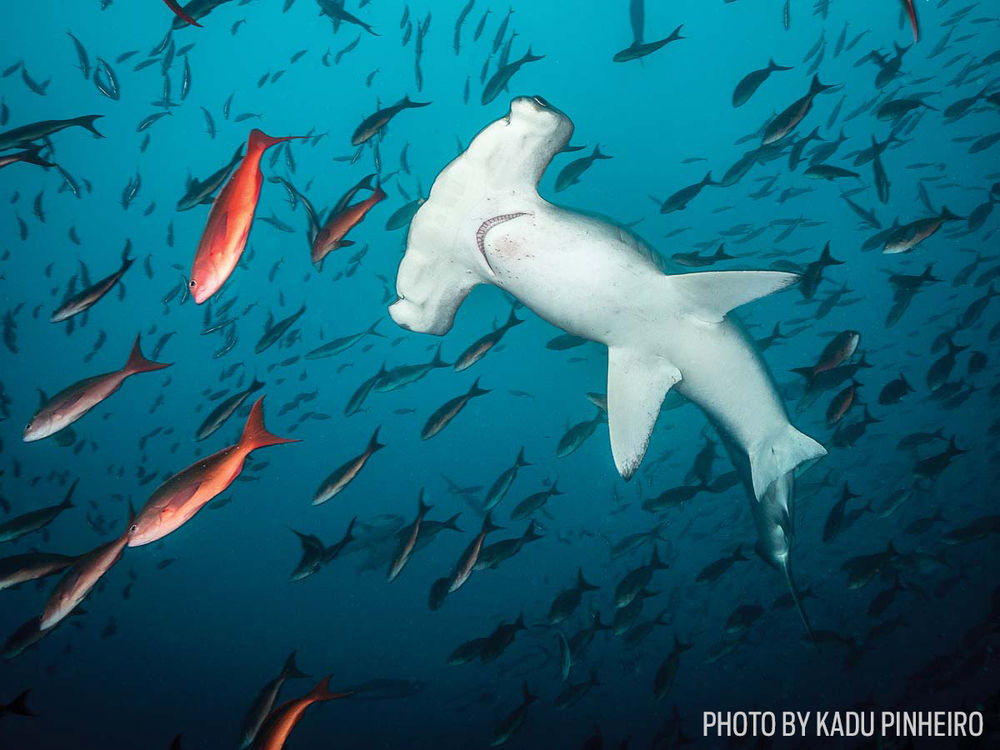 The elegance of a hammerhead never gets old.

Hold on to your regulator – we’ve found the best shark dives that guarantee you’ll be in the middle of the action with the all-stars of the ocean.

The baitballs kick off the sardine run off Port St. Johns, South Africa. On the playlist: dusky, blacktip, tiger, bull, bronze whaler, thresher and mako sharks. The sharks and whales herd fish from the bottom. Dolphins round the schools from the side. Seabirds swoop in from the top. Together, it’s one of the planet’s most dramatic examples of symbiotic hunting. Happening from around mid-June to mid-July, there’s also a drift powering it all, the Agulhas Current. “It’s a strong current, and as a diver, you’re traveling in it — but you don’t even feel it,” says Nicki Gibson, public relations manager for Blue Ocean Dive Resort.

“You’ll see anywhere from 50 to 200 hammerheads in the summer months,” says Avi Klapfer, founder of the Undersea Hunter fleet of liveaboards. He’s talking about Cocos Island, 342 miles west of the Central American coast, and a place his team regularly visits. Here, the animals don’t come to mate or feed, but to be cleaned. The other strong attraction for the massive schools is magnetic: Cocos, a seamount, has a strong energy resonance, which the animals use for navigation. “They use the seamount like a beacon,” says Klapfer. “Then they simply circle.” 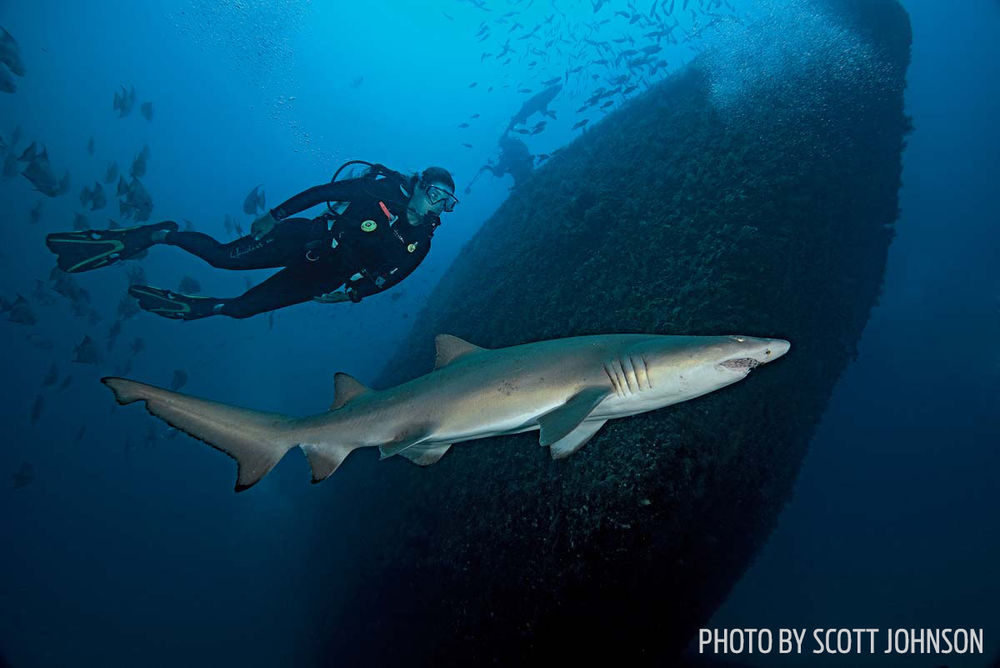 A diver and tiger shark explore a shipwreck

The weather off Morehead City, North Carolina, is notoriously fickle. With luck, you can get 80 feet of visibility and as many as 100 sand tiger sharks cruising around Papoose, Spar, Caribsea or Aeolus. Descend onto the 430-foot oil tanker Atlas and it’s possible to drop into smaller rooms where sand tigers carve tight circles. A perfect time to visit is during the North Carolina Wreck Shark Shootout, a photography competition hosted by Mike Gerken. The wrecks alone provide ample shutter fodder, but coupled with sharks, you get endless opportunities to overload your memory card.

“You have a wall on both sides and a hundred sharks everywhere,” says Sebastien Guilloux of the pass diving in French Polynesia. Guilloux manages Topdive, a scuba center operating on six islands; his favorite for pass diving is Fakarava. There, the lagoon has two openings, Tetamanu and Tumakohua, that are perfect for riding the current. Both put you among dozens of silky and gray sharks, as well as blacktips and the occasional tiger and great hammerhead. Regardless of where you put in, you’ll dive a high — or incoming — tide to ensure the group stays together during the hourlong dive. 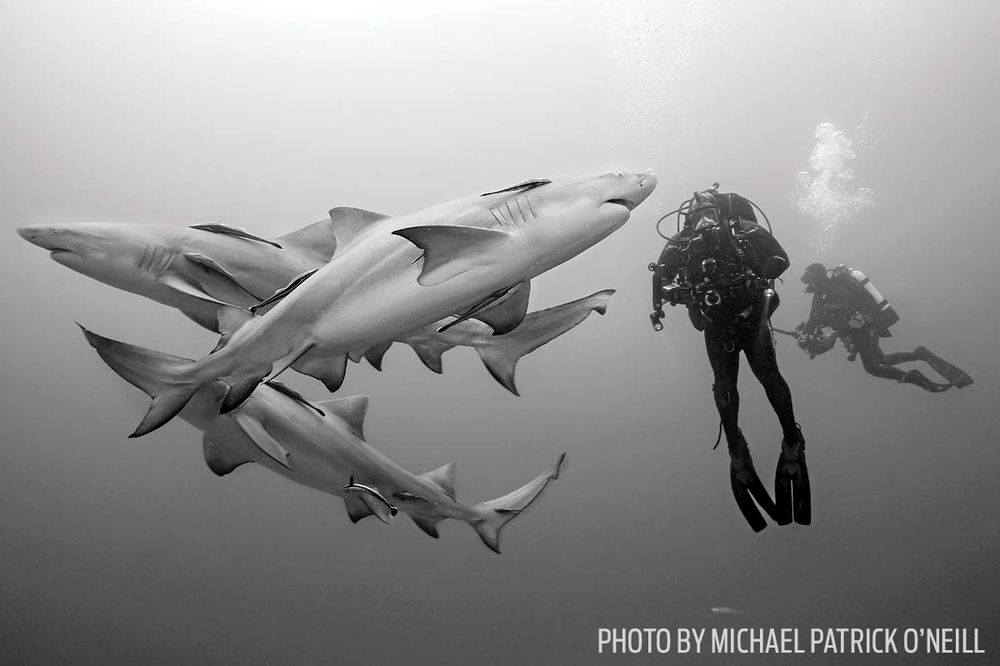 Lemon sharks off the coast of Jupiter, Florida

“Depending on how productive the season is, divers will see anywhere from eight to 20 lemon sharks,” says Gerry Carroll, owner of Jupiter Dive Center. He’s talking about the migration off the mid-Florida Atlantic coast every January and February. “The lemon sharks have a tendency to be inquisitive, which can be nerve-wracking for novice divers.” For everyone else, it’s a calm 55-minute nitrox drift. As to why the lemons appear, Carroll says, “It’s my understanding that they reside in the Carolinas the rest of the year and come south to stay ahead of the cold water.”

Think Galapagos, and hammerheads come to mind. But it’s the whitetips that are the real showstoppers. “You’ll never see hammerheads feed because it’s in blue water at night,” says Wayne Hasson, president of the Aggressor fleet, which includes the Galapagos Aggressor III. “Whitetips hunt in packs, like dogs, sticking really close together to pin something,” he says. “They work as a team to move mountains of coral and rocks to get a fish that only one shark will get.” Says Hasson, “It’s all drift diving in the Galapagos — you go in one place and might come out half a mile down the reef.” 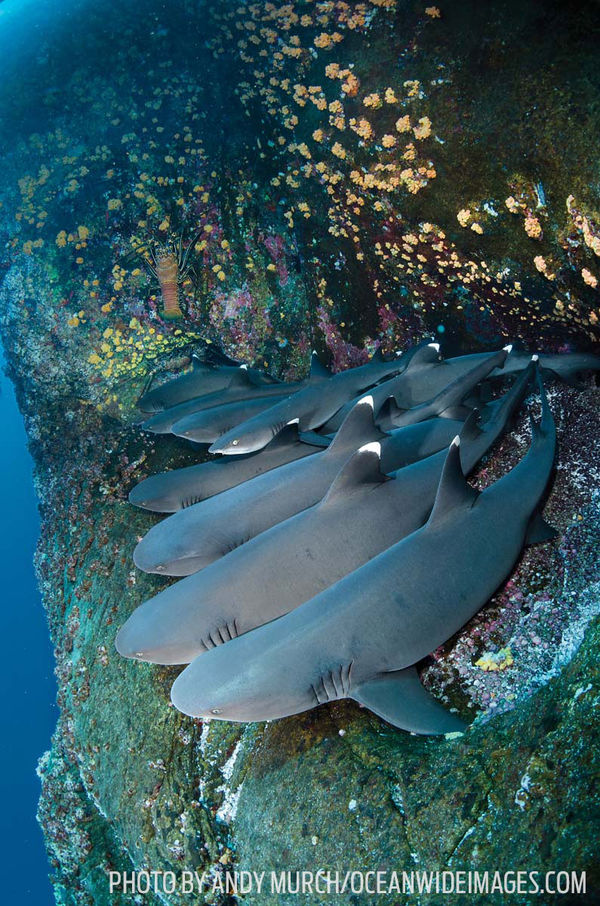 A group of whitetip reef sharks off Revillagigedo Archipelago, Mexico

With the strong currents that usually coincide with diving in Palau, a reef hook is almost a must. The plus side: You choose your own seat on the reef. Drop in at Ulong Channel, a drift-swept site 15 miles west of the city of Koror, Palau, and secure yourself along a rock or dead patch of reef. Then settle in. Don’t worry, reef hooks help protect the reef — and keep you from blowing through your air. In the mouth of the channel, find whitetip sharks and grouper making quick work of an oftenpresent baitball. The dive continues when you unhook, cruising past gardens of lettuce-leaf corals, grouper and more.

“There is only one area in the world where thresher sharks can be seen daily — and that is Monad Shoal, here in the Central Visayan island group of the Philippines,” says Matt Reed, owner of Evolution, a Malapascua dive resort. “Out of 365 days a year, we might expect to not see them about 10 of those days.” Monad Shoal starts at 50 feet, dropping to 300 and beyond. Most encounters happen at roughly 75 feet, but sometimes the sharks are deeper. Divers must hold at least an advanced open water diver certification. “It’s a delicate environment, which we must protect for the sharks’ benefit as they come to be cleaned of parasites by smaller fish,” he says. “If we damage it, sharks might not visit.” 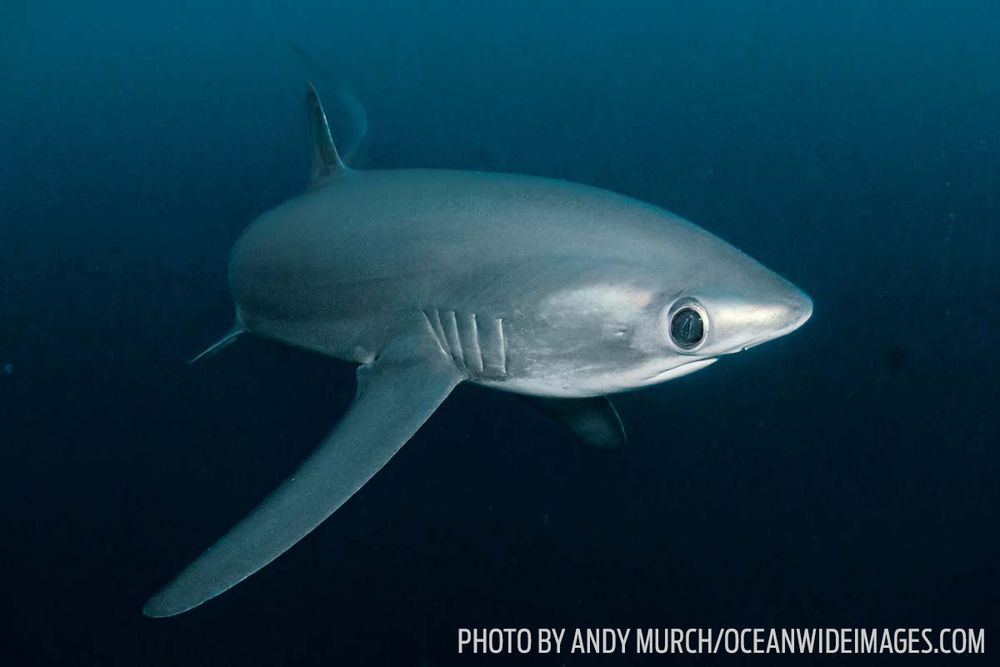 A pelagic thresher shark in the Philippines

“It’s really hard to describe how surprising, emotional and variable this expedition is,” says Andres Gomez Copello, oceanographer for Colombia Underwater Expeditions. He’s talking about the voyages to Punta Gallinas, the northern tip of Colombia — chosen not just for reliable shark encounters but because travelers get to work with the local Wayuu community to transition their way of life into saving these local animals.

It’s hard to list all the sharks you’ll encounter in this destination — aka Socorro Islands — 250 miles south of Los Cabos, visited by the Solmar V liveaboard November through June. These waters are home to seven species of sharks, including schooling hammerheads and whitetips sleeping in caves; in winter and spring, whale sharks pass through.

The Bahamas are notorious for an abundance of sharks and there’s a good reason why. You can dive with hammerheads in Bimini and oceanic whitetips off Cat Island, for starters. Stuart Cove’s shark-feeding experience is the most famous dive in the Bahamas and with good reason. It’s controlled chaos — a frenzy of action that’s nearly impossible to keep up with.