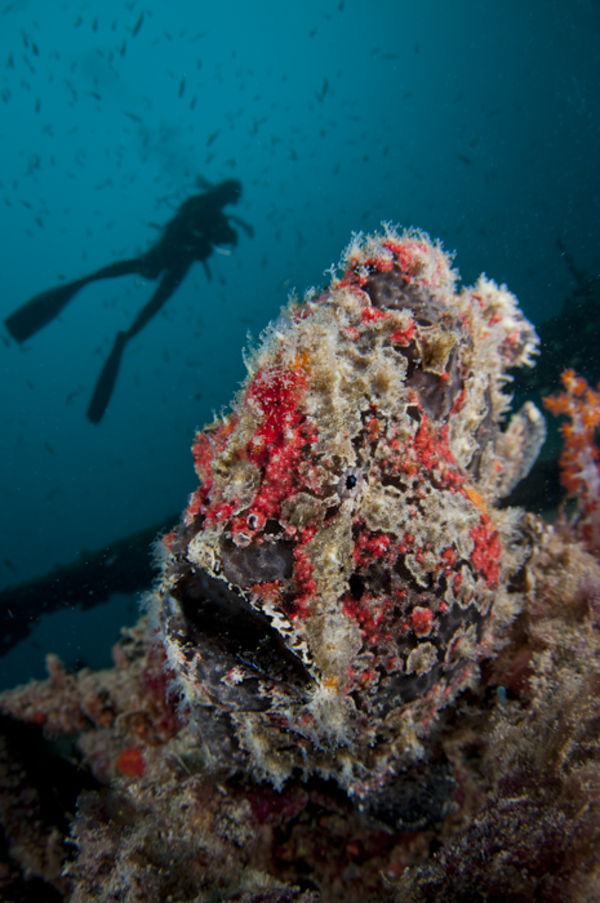 Look for frogfish near sponges or corals.

Divers and underwater photographers all over the world seem to have a never-ending debate about which fish or marine animal is their favorite – and for many, frogfish are at the top of the list. The 40-plus species of frogfish (a type of anglerfish), live in tropical and temperate waters, range from 2-38 cm in size, and truly are masters of camouflage in the underwater world. Along with their cryptic behavior, these fascinating fish are a challenge and a delight for a diver to find.

Frogfish are ambush predators and often found on reefs or sandy bottoms, near or on sponges and corals of the same or similar color, near jetty pilings, moorings, ropes, debris, seagrass, mangrove roots, and amongst floating sargassum seaweed. They employ “aggressive mimicry” to attract prey, using a modified, moveable dorsal spine (illicium) as a fishing rod with a lure (esca) which it dangles close to its mouth. In a lightning-quick 6 milliseconds (the fastest of any fish), their mouths can expand 12 times in volume to consume prey much larger than themselves. As they sit still waiting for their prey, one of many alluring aspects about these fish for photographers of all levels is that they are quite easy to shoot.

1. Lenses Macro lenses such as 60mm, 100mm, or 105mm are the standard choice for shooting frogfish, and because they’re not particularly shy you can shoot them very close up. Supermacro images can be achieved using close-up diopters or extension tubes – to shoot tiny, juvenile frogfish, but also for extreme close-ups of eyes and faces.

However, wide-angle fisheye lenses such as the 10.5mm, 15mm, 10-17mm, can even be used for larger species such as the Giant Frogfish. These lenses can focus to within about an inch from the front of the lens, allowing for “wide-angle macro” (CFWA — close-focus wide-angle) to give a unique perspective.

2. Depth-of-field Focus sharply on the eye of the frogfish (as with all fish subjects). Using a low f-stop for a shallow depth-of-field produces nice, soft “bokeh” in the foreground and background which can look great for portraits of frogfish, and when the visibility is bad it can lessen the amount of backscatter in your image (frogfish are often in sandy, mucky habitats). A low f-stop is also necessary for shooting difficult, black frogfish, to distinguish their eye and skin detail – but doing so often means over-exposing the background and foreground.

Use a higher f-stop for a greater depth-of-field to capture intricate detail for some portraits and close-up abstracts. When shooting any kind of frogfish behaviour, such as yawning or feeding for example, you again need a high f-stop for a greater depth-of-field. Move back a bit and give the frogfish some room to “behave.” Locking the camera on manual focus eliminates any delay with autofocus, allowing you to fire shots rapidly (using a fast shutter speed) to capture the action in those exciting few split-seconds.

3. Composition For portraits, shoot head-on, or diagonally head-on. This is also good composition for capturing a frogfish yawning. Frogfish have exceptional camouflage, and it’s a good idea to try and convey this. Compose your image so the frogfish is smaller in the frame and slightly off-center, therefore the viewer has to find the fish within the image, making its camouflage even more impressive.

If the frogfish is fishing with its lure, shooting from the side works best, and from a low angle to isolate the rod and lure from any distracting background.

If you’re shooting a larger frogfish with a wide-angle lens, get as low as possible and shoot slightly upwards to isolate the fish clearly against the blue water background.

Due to the many small variations in camouflage, colour, size, and apparent shape between species, to the untrained eye identifying an unusual frogfish can be tricky. It’s a good idea to snap a few ID shots (side-on profiles of the whole fish, head & mouth, dorsal fin, tail fin; and close-ups of any significant markings; rod & lure).

4. Lighting Capturing portraits, close-up abstracts of the face, behavior (feeding, mating, etc.) and most compositions which show the frogfish’s camouflage amongst its habitat – standard front lighting with 2 strobes is suitable in many of these situations.

Side-lighting with only one strobe will create shadows and textures, highlighting intricate details of the fish, and gives a darker background – making the frogfish stand out more clearly from the background, rather than appearing ‘flat’ when often using 2 strobes on equal power. With 2 strobes, you should play around with different power settings to find a good balance for the result you are trying to achieve.

To make a frogfish stand out clearly from a distracting background, use a snoot. This will isolate the frogfish’s bizarre-looking face and give you a completely black background, resulting in an interesting and spooky feel to the image.

For frogfish with hairy appendages such as the hairy frogfish, backlighting with a torch or a small strobe will really make the hairy outline of the fish stand out. You could also use another strobe for additional, softer front lighting to make the eye, face and skin visible, rather than just capturing a silhouette with the backlighting.

5. Behavior Frogfish behavior is what many photographers aspire to capture, and lucky divers may get to witness some of the following:

Ambulating (walking/moving) over the seabed, or through the water column – this is when the full shape of a frogfish can be seen clearly.

Yawning – watch for when a frogfish “smacks” its lips together or does a “false yawn,” as this is frequently a signal that it may be about to let out a big yawn.

Fishing – the lure, and the pattern in which they fish with it, varies with different species.

Feeding / stalking – frogfish often attempt to consume animals larger than themselves, and some frogfish have been observed actively stalking their prey over a short distance.

Cannibalism – frogfish are known to feed on others of the same species.

Mating / spawning – this usually occurs within a couple of hours after sunset, and a mating pair will rise up off the seabed into the water column to spawn.

6. Patience Patience (and dumb luck!) is absolutely key in capturing shots of frogfish behavior. I’ve spent countless hours sitting in front of frogfish just waiting for them to yawn, or do something, only to run out of bottom time and then just as I leave, they yawn! That’s just the way it goes sometimes. With a frogfish on a sandy seabed, get into a comfortable position, adjust your settings and lighting, decide on your composition, focus on the eye, and take some test shots. You then have to dig in and just wait, watching for any signals that indicate something may be about to happen – when it does, keep your cool, and get the shot!

7. Respect. Frogfish live on the seabed or nestled into nooks on a reef, so it’s important to be aware of your surroundings and not damage any coral or other marine life when settling down to shoot one. While frogfish aren’t very camera shy, be respectful and don’t harass them. Individuals can be seen in the same spot on a dive site for weeks, which is a treat for the many divers who like these fish, but if they’re harassed too much, they’ll leave. Frogfish may be seen in pairs naturally, but don’t move 2 separate frogfish together just for the sake of a “2-in-1” shot – they can be cannibalistic! Frogfish’s eyes are sensitive to bright light, like most fish, so try not to shoot hundreds of images of the same fish, blinding them with your strobes. Shoot quality, not quantity! Many divers believe that yawning is actually a sign of aggression, so keep that in mind and if you’ve got your yawning shot already, then move on.

Frogfish are a much-loved photographic subject and I’m sure they’ll stay that way for a long time. They’re easy to observe and shoot, great for practicing portraits or yawning shots, and they’re quite reliable too – if you know where one lives on a dive site you can always go back for more, and no doubt you will!

Christian Loader (UK) is a full-time professional photographer for Scubazoo. He has worked extensively throughout Southeast Asia as an underwater videographer and photographer, and lives in Kota Kinabalu, Sabah, Malaysian Borneo.

Get more tips for photographing frogfish from Mike Bartick.