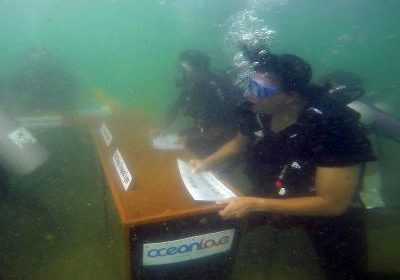 When it comes to saving marine life and the oceans, what better venue to conduct a conference on conservation than underwater?

The trend kicked off in Maldives when the country’s government conducted the world’s first underwater cabinet meeting in 2009, off the island of Girifushi, near Male, to draw global attention to the issues of climate change.

The idea seems to have caught on in God’s Own Country too. After an underwater clean up drive held recently, a conference of five CEOs from various companies in Trivandrum was held underwater, near the Groove Beach in Kovalam. And no, it was no namesake conference, but a real one, with a specially designed table and chairs set on the ocean floor! The group, composed of four men and one woman, had a point to make – to minimise marine pollution and to spread awareness to safeguard the underwater ecosystem. They had done prior training in diving before the conference, but nevertheless describe it as an out-of-the-world experience. Here is how they did it.

A ‘surreal’ experience
Hema Menon, Centre Head, UST Global, Trivandrum, says, “It was truly a surreal experience. Though we had some training earlier, now we were doing it for real. I also collected some waste which should not have been there. We hope the conference will be an eye-opener, a beginning for the conservation of the marine ecosystem. I am happy to be part of world’s first-of-its kind meeting and feel more responsible about conserving the aquatic life underneath. We will spread awareness among our employees and will conduct and participate in more ocean clean-up campaigns.”

Hema is one of the five who took part in the conference, the others being Dinesh Thampi, vice-president, TCS; Raja Gopal Iyer, CEO of Udayasamudra Leisure Beach Hotel; Ronny Thomas Zachariya, CEO of Avon Mobility solutions and Dr Shyam Kumar, CEO of Neologix Software Solutions.
All fitted with scuba gear, the group dived into waters around 50 meters away from the shore, six meters under the sea. Says Jackson Peter, who guided the participants under water, “We trained the participants on how to move around and conduct a meeting under water. They communicated with hand gestures and had placards with their decisions. They took the pledge to “protect the ocean and marine life” and signed a memorandum to Protect the Ocean and Marine life, in laminated paper.”

‘There will be more plastic waste in the sea than fish by 2050’
Ocean floors across the world are clogged with piles of non-degradable waste, from polythene carry bags to used diapers. The waste settles on the ocean beds or they float around as islands near the sea shore. The discarded plastic also wash up on the seashores, posing a threat to shore dwellers. It is with an intention to spread awareness on all these issues, that they planned such a venture, says the group.

The conference, Jackson says, is a first step towards marine conservation. “Many studies have been conducted on land and there are laws to protect the land. But, marine life is yet to get attention. As per latest reports there will be more plastic waste in the sea than fish by 2050.”

The novel initiative also got extended support from Kerala Tourism Department. D Balamurali, Additional Director (General) of Department of Tourism, says, “Such an exercise will catch attention and will make the public think about the reason behind it. We welcome such initiatives as it shows their social responsibility towards safeguarding the ecosystem. Apart from the government’s initiatives, measures like these from private bodies will boost the idea of responsible tourism.”

This is just a beginning…
The conference has also introduced a campaign ‘Ocean Love’ which will incorporate various events aimed at protecting the Arabian Sea and beaches from marine plastic pollution and to reduce carbon footprints to save the earth from global warming.

Also, the hotels and resorts on the coastal belt of South India have decided to form a club named ‘Beach and Marine Environment Protection Club’ (BMEPC) to come out with an action plan to protect the ocean and marine life. The club, says Raja Gopaal Iyer, aims to educate citizens that it is their responsibility that waste should be disposed of properly so that it doesn’t end up polluting our oceans, rivers and lakes. “Plastic pollution is a global issue that impacts our sea, our health and our well-being. The club will be launched on June 8, World Oceans Day. The members under this club will put forward do’s and don’ts to be followed by visitors who utilise the respective beach sides. We will indulge them in marine conservation activities clubbing tourism element in it. There are around 40 hotels coming in the beach belt but we will include backwater resorts also to support our programs. Gradually we have plans to extend it to entire Indian Coastal belt too.”

Let’s clean up our water bodies

– An underwater Valentine programme was held off the Groove Beach in Kovalam on February 14, 2017. In the event, which exhorted the public to love ocean life, a total of six couples dived four meters under the ocean and proposed to their partners.

– As part of International Women’s Day, a team of eight women, including K Vasuki, director, Suchitwa Mission, dived into the waters off the Kovalam Grove Beach, for an underwater clean-up campaign.

– Another marine ecosystem conservation drive was held on the banks of the Chaliyar in Nilambur on September 23, 2016. With the motto ‘Lets Kayak for a Cause’, a group, consisting of 50 volunteers from in and around the State, assembled and cleaned up the trash floating along the river banks. And in three days, the group covered 68 km of the river and collected more than 600 kg of garbage.